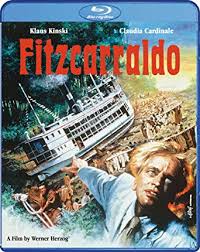 The making of this film is a feat as utterly Quixotic and improbable as its protagonist!

Klaus Kinski stars as the wild-eyed Irishman Brian Sweeney Fitzgerald. He is intent on building an opera house in Iquitos in the middle of the Peruvian Jungle and bringing Enrico Caruso to sing there on opening night.

To finance his dream, he must take a steamship up a tributary of the Amazon to unexplored regions to look for the most desirable commodity of the area….rubber!

The film took over 4 years to shoot and won Werner Herzog a Palm D’Or at the Cannes Film Festival for best director.

You will not be the same at the conclusion of this movie!!!

Please join us for a fun evening of cinema…schmoozing…discussing and having a good time! State of the Art projection, large screen & great sound!

Snacks and cold drinks included in the $10 price of admission. $8 for JCCV members.
A classic cartoon and/or newsreel prior to the feature!