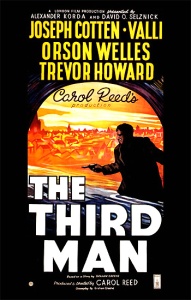 The Third Man is a British cinematic icon. An undisputed all time classic, the film features some of cinema’s most memorable set pieces… the chase through the sewers…the enormous Ferris Wheel…the elm-lined cemetery…Anton Karas’ zither score. This movie is a world wide phenomenon in itself…in the top 3 of all time!!

Please join us for a fun evening of cinema…schmoozing…discussing and generally having a good time! State of the Art projection, large screen & great sound!

Snacks and cold drinks included in the $10 price of admission.

Always a classic cartoon and newsreel prior to the feature!