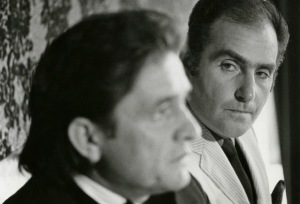 Would you walk away from a million dollars to preserve your integrity?

Join us for a fascinating conversation with filmmaker Jonathan Holiff, whose 2013 documentary, “My Father and The Man In Black,” chronicles the unlikely relationship between bad-boy Johnny Cash and his longtime manager, Canadian, Saul Holiff—the man who put Johnny together with June.

Jonathan’s film (clips of which will be shown) is a behind-the-scenes look at Johnny Cash’s troubled 1960s, as well as an examination of the father-son relationship; Saul Holiff was Jonathan’s father. The film also supplies the ending that was missing from the hit movie, “Walk The Line:” Johnny Cash’s conversion to evangelical Christianity.

In the early 1970s, at the height of the singer’s career, Johnny Cash was “born again.” The drama that followed between manager and star, born out of concern for Cash’s career, saw faith and reason collide. When one man finds a new calling, the other has to choose between his job and his self-respect.

Saul Holiff retired to Victoria in 1979. In 1983, enrolled as a mature student, he graduated with an Honours B.A. in History from the University of Victoria. In 2005, at the age of 79 and in ill-health, Holiff committed “rational suicide.”

This live webinar featured clips from the film as well as recorded phone calls between the two men from the early 1970s.

Attendees were invited to ask questions and share comments after Jonathan’s talk.

Please click on the link below to view the webinar recording.
2020_10_15_Zoom_Webinar

This is a recording of a free live webinar brought to you by the JCCV.