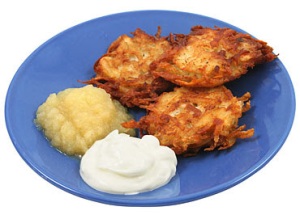 Potato Latkes (Take-Out only) will be the only Deli menu item available during LATKE MANIA, from November 30th to December 17th.
LATKE MANIA Take-Out hours are Tuesdays to Fridays from 11:30 am to 1:30 pm.
No other Deli menu items will be available, and the dining area will be closed, during the three weeks of LATKE MANIA.

The Deli will close on Friday, December 17th for the holiday season and will reopen on Tuesday, January 4th with the full Deli menu and dining in.